Edwards, J. (2014). Sifting through the Sands of Time: Mourning and Melancholia Revisited via the Documentary Nostalgia for the Light (2011). International Journal of Psycho-Analysis, 95(4):791-799.

Tutter, A. (2011).Interdisciplinary Studies: Metamorphosis and the Aesthetics of Loss: II. Lady of the Woods—The Transformative Lens of Francesca Woodman. International Journal of Psycho-Analysis,92(6):1517-1539.

West-Leuer. B. (2017). Black Swan – The Sacrifice of a Prima Ballerina: Psychosexual (Self-)Injuries as the Legacy of Archaic Experiences of Violence. International Journal of Psycho-Analysis, 98(4):1233-1244.

Psychoanalytic approaches to film and television have often focused on women through the lenses of gender identification and desire. This salon discussion puts women in the spotlight, focusing on femininity as an active screen form. Exploring a diverse range of topics encompassing themes of loss, violence, voice, the body, identity, ethics, and the maternal, our speakers will focus on Hannah Arendt (dir. Margarethe von Trotta, 2012), Swedish television show Bron/Broen [The Bridge] (SVT, 2012- ), the photographic and video art of Francesca Woodman, and short experimental video essays that engage with the psychoanalytic philosophy of Luce Irigaray. The salon will include a live video relay presentation from New York, as well as London-based speakers, and we look forward to creating opportunities for transatlantic debate and dialogue with our guests and audience members. 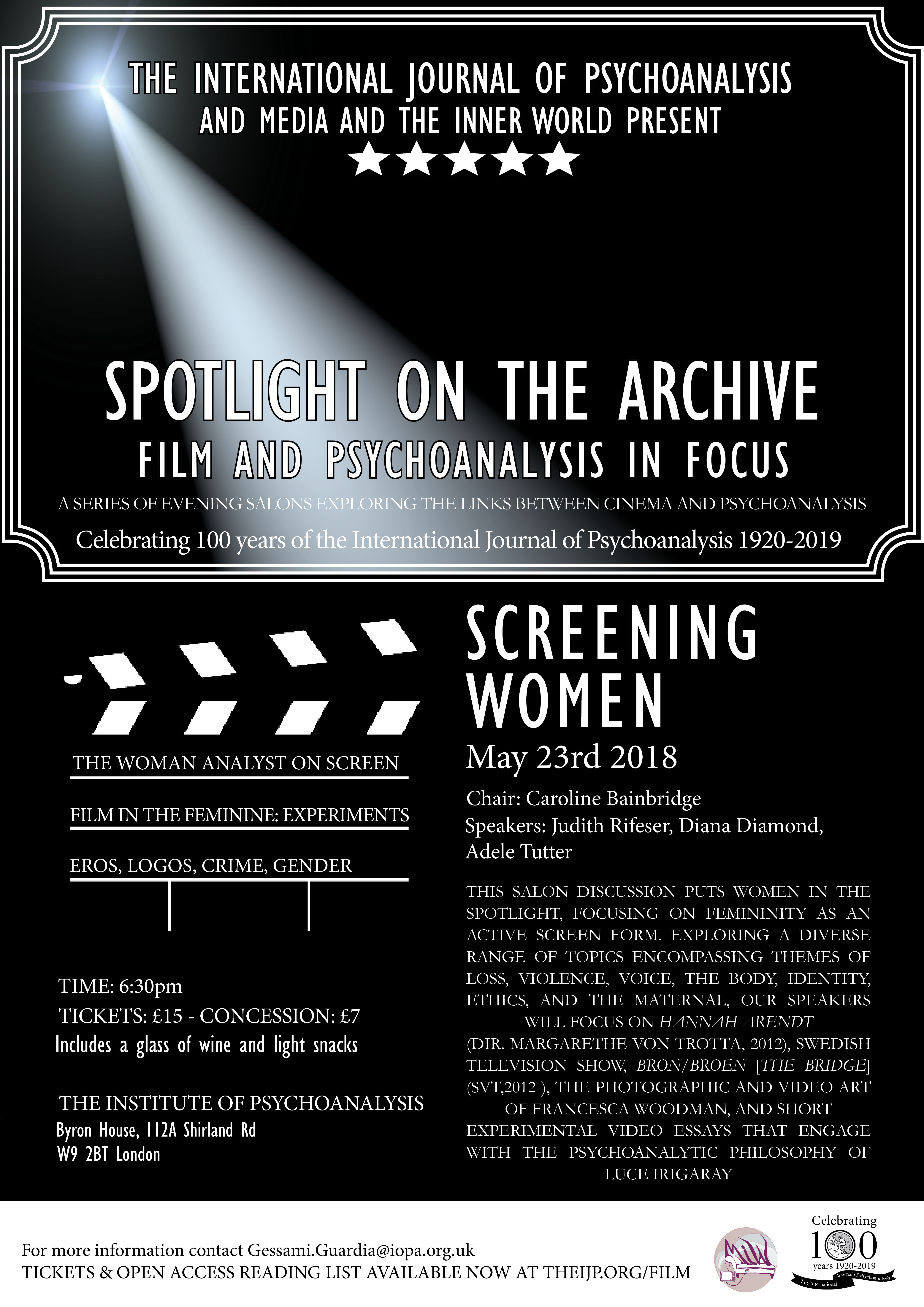 Diana Diamond
Diana Diamond is Professor of Psychology at City University of New York and is on the faculty of the Weill Cornell Medical College and New York University Postdoctoral Program in Psychotherapy and Psychoanalysis. She has written numerous articles on personality disorders, attachment theory and research, mental representation, gender and psychoanalysis, and the application of psychoanalytic theory to the understanding of narrative and symbolism in cinema. She is the co-author or co-editor of four books, including Attachment and Sexuality (Routledge Press), the forthcoming A Clinical Guide to Treating Narcissistic Disorders: A Transference Focused Psychotherapy (with Frank Yeomans, Barry Stern, and Otto Kernberg), and the forthcoming Cinematic Representations of the Holocaust: Psychoanalytic Perspectives (with Bruce Sklarew). She has also co-edited two previous issues of Psychoanalytic Inquiry on film and psychoanalysis (with Andrea Sabbadini and Harriet Wrye). She is a psychoanalyst who practices in New York. She is the recipient of several awards including most recently the research award for Division 39 of the American Psychological Association and the inaugural International Society for Transference Focused Psychotherapy (ISTFP) Research Award. She is on the Editorial Boards of Psychoanalytic Psychology, Psychological Issues, the Journal of Couple and Family Psychoanalysis, and Psychoanalytic Inquiry. She is a graduate of the New York University Postdoctoral Program in Psychotherapy and Psychoanalysis, and has a certificate in organizational consultation from the Socio-analytic Training Program in Organizational Consultation at the Institute for Psychoanalytic Training and Research (IPTAR). She is also in private practice of individual and couple therapy and psychoanalysis.
Judith Rifeser
Judith Rifeser is a doctoral candidate, audio-visual practitioner and visiting lecturer in the Department of Media, Culture and Language at the University of Roehampton. She is also a Teaching Fellow at UCL.

In 2016, Judith’s stop-motion animation short film, A Letter Of Love To You premiered at the London Feminist Film Festival and was further selected in the run-up to the Leeds Queer Film Festival. It also showcased as an installation piece at the week-long FiLia London event. Her latest audio-visual experimental work, Care|ss premiered at the ICA in August 2017, following the invitation of Luce Irigaray. Her practice-as-research project, funded through the Roehampton Vice-Chancellor Scholarship Award, investigates the notion of touch and feminine subjectivity in the films of women directors from around the world of the 2000s. Her point of the departure is Irigaray’s more recent work on the “touch of the caress”. Judith is conducting her PhD project under the supervision of Professor Caroline Bainbridge and Dr William Brown.

Adele Tutter
Adele Tutter, MD, PhD is Assistant Clinical Professor of Psychiatry at Columbia University and faculty, Columbia University Center for Psychoanalytic Training and Research and the New York Psychoanalytic Institute. Her interdisciplinary scholarship, focused largely on creativity and its connections to grief, loss, and oppression, has been honored by the APsaA CORST, Menninger, and Ticho Prizes, among many other awards. Dr. Tutter is the author of Dream House: An Intimate Portrait of the Philip Johnson Glass House (University of Virginia Press, 2015), co-editor, with Léon Wurmser, of Grief and its Transcendence: Memory, Identity, Creativity (Routledge, 2016), and editor of The Muse: Psychoanalytic Explorations of Creative Inspiration Routledge, 2017). She is currently completing a second monograph, Mourning and Metamorphosis: Ovid, Poussin, and the Aesthetics of Loss. She has lectured extensively throughout the United States, and currently sits on the editorial board of The International Journal of Psychoanalysis, Psychoanalytic Quarterly, Psychoanalytic Inquiry and American Imago. She chairs the APsaA Artist and Scholar in Residence Committee and is regular contributor of art criticism to the Brooklyn Rail. She is in private practice in Manhattan.