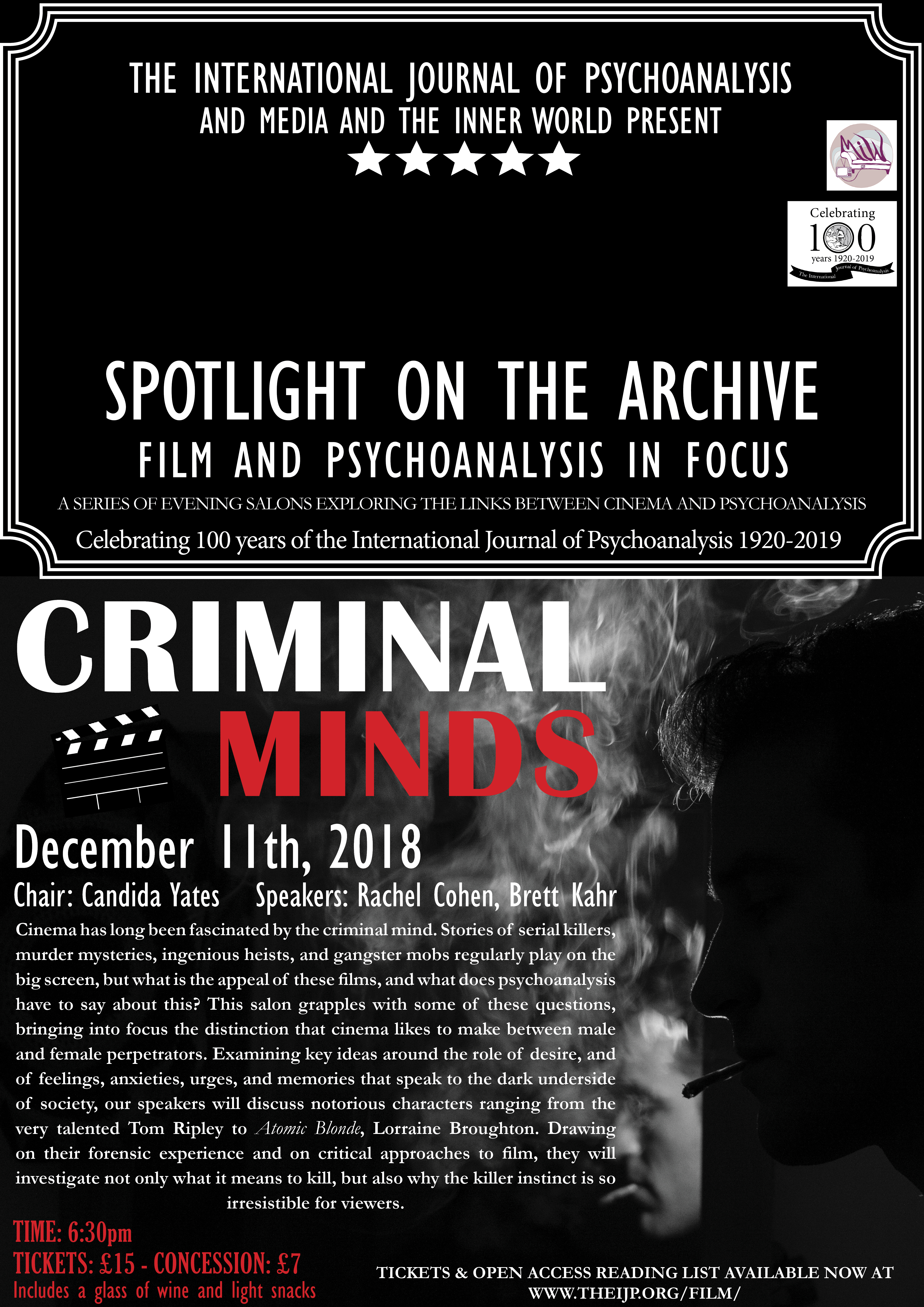 Cinema has long been fascinated by the criminal mind. Stories of serial killers, murder mysteries, ingenious heists, and gangster mobs regularly play on the big screen, but what is the appeal of these films, and what does psychoanalysis have to say about this? This salon grapples with some of these questions, bringing into focus the distinction that cinema likes to make between male and female perpetrators. Examining key ideas around the role of desire, and of feelings, anxieties, urges, and memories that speak to the dark underside of society, our speakers will discuss notorious characters ranging from the very talented Tom Ripley to Atomic Blonde, Lorraine Broughton. Drawing on their forensic experience and on critical approaches to film, they will investigate not only what it means to kill, but also why the killer instinct is so irresistible for viewers. 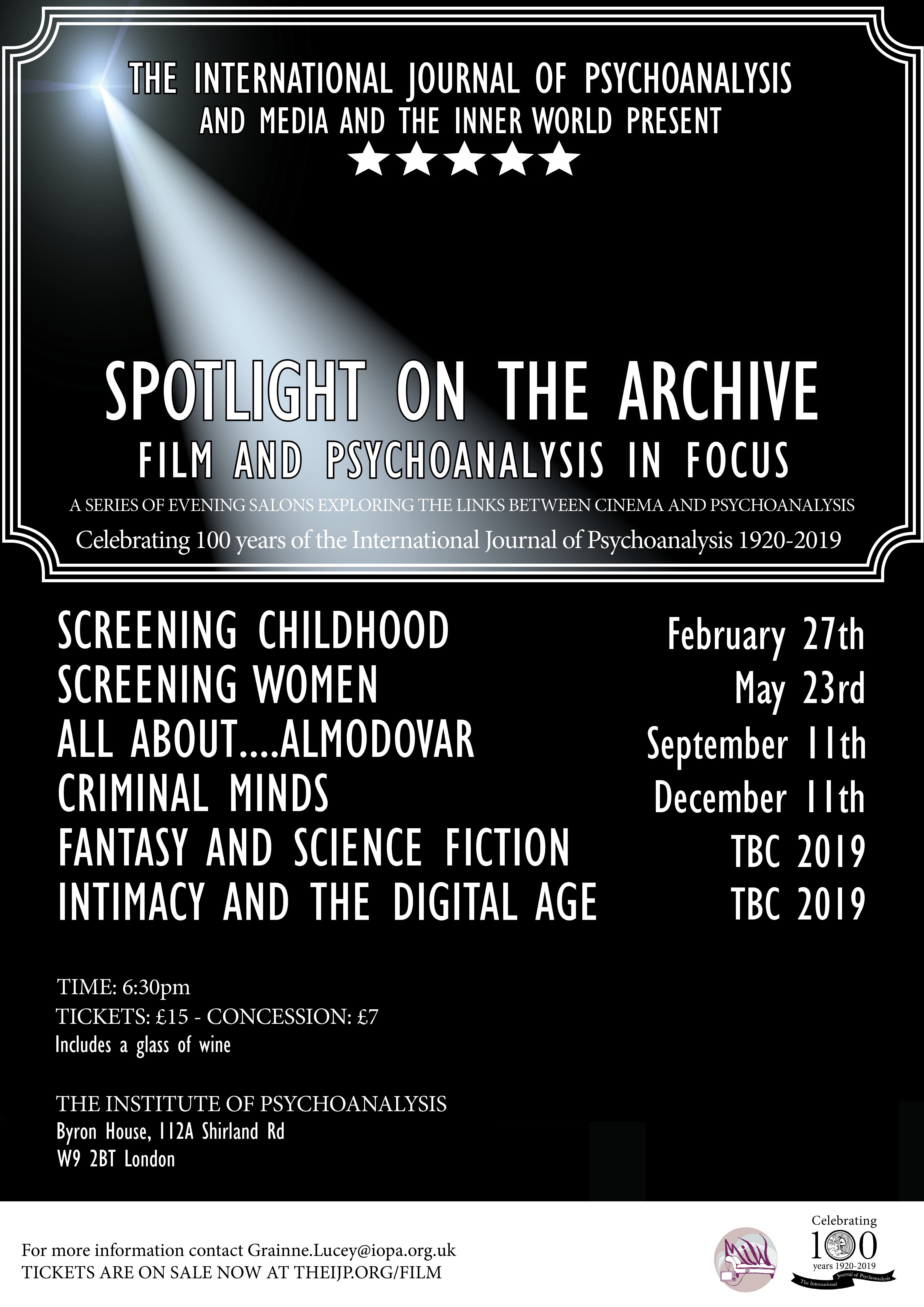 Candida Yates
Candida Yates is Professor of Culture and Communication in the Faculty of Media and Communication at Bournemouth University, UK. She is an interdisciplinary writer, researcher and group practitioner in the field of Psychosocial Studies and its application to film, culture, society and politics. She is a Director on the Executive Boards of the US Association for the Psychoanalysis of Culture and Society and the UK Association for Psychosocial Studies and works with psychoanalytic and artistic practitioners and scholars to create new understandings of emotion and affect in the public sphere. She is a Director (with Professor Caroline Bainbridge, University of Roehampton) of the research network Media and the Inner World that brings together media practitioners, psychoanalysts and academics to explore the emotional and affective dynamics of media, culture and politics. Professor Yates is currently leading an interdisciplinary Bournemouth University project that applies insights from psychoanalysis and Group Analysis to examine the potential for empathy to emerge in face-to-face and online group settings in a post-brexit landscape.

Professor Yates has published widely on a range of psycho-cultural and political subjects in journal articles and special editions. Her monographs include:
The Play of Political Culture, Emotion and Identity (2015); Masculine Jealousy and Contemporary Cinema. (2007) and Political Leadership and the Psycho-Cultural Imagination (forthcoming 2019). Her Co-edited volumes include: Television and Psychoanalysis, Media and the Inner World: Psycho-Cultural Approaches to Emotion, Media and Popular Culture (2014); Emotion: New Psychosocial Perspectives (2009); Culture and The Unconscious (2007). She is Joint-Editor (with Caroline Bainbridge) of the Karnac/Routledge series: Psychoanalysis and Popular Culture, and is Consulting Editor on journals: Psychoanalysis, Culture and Society and Psychosocial Studies.

Rachel Cohen
Rachel’s longstanding passion for a psychoanalytic approach to the study of film and film audiences – in relation specifically to constructions of criminality and criminal identity – is reflected in her strongly interdisciplinary academic background. This includes a BA in Film Studies and an MA in Forensic Linguistics. Her PhD thesis, entitled Cinematic Constructions of the Female Serial Killer: A Psychosocial Audience Study (2013), explored the ways in which spectatorial “investments” are motivated psychologically, ideologically, socio-culturally and biographically, and operate in conscious and unconscious ways. Rachel’s subsequent teaching work made use of contemporary psycho-cultural theory and methodology, as a means of exploring the psychodynamics of cultural engagement.
Having developed a keen interest in forensic mental health service delivery, Rachel is currently based at the University of Bristol’s Centre for Academic Mental Health, where she is project managing an evaluation study of the Offender Personality Disorder Pathway for female offenders, which is jointly funded by the National Offender Management Service (NOMS) and NHS England. The study aims to explore the impact of new services on reducing risk and reoffending in this complex and high risk offender population, and has involved in-depth interviews with staff and offenders across a number of treatment and progression services, and in custodial and community/probation settings.
Brett Kahr
Professor Brett Kahr has worked in the mental health field for over forty years. He is Senior Fellow at the Tavistock Institute of Medical Psychology in London and, also, Senior Clinical Research Fellow in Psychotherapy and Mental Health at the Centre for Child Mental Health.

Kahr is also a trained historian, specialising in the history of psychoanalysis, and he serves as Trustee of the Freud Museum London and of Freud Museum Publications, and, additionally, as Series Co-Editor of the Routledge “History of Psychoanalysis Series”. Additionally, he has worked as a mental health broadcaster, having been Resident Psychotherapist for B.B.C. Radio 2 and Spokesperson for the B.B.C. mental health campaign “Life 2 Live”.

His other books include: D.W. Winnicott: A Biographical Portrait (1996), which received the Gradiva Award for Biography; Sex and the Psyche (2007), which became a Waterstones Non-Fiction Bestseller; Life Lessons from Freud (2013) for the School of Life “Great Thinkers” series; Tea with Winnicott (2016), which had been chosen as a book of the year in The Guardian; Coffee with Freud (2017); and, most recently, How to Flourish as a Psychotherapist (2019). Next year, he will publish Bombs in the Consulting Room: Surviving Psychological Shrapnel, and, also, The Traumatic Roots of Schizophrenia. He has served as series editor for over fifty titles.

He works in private practice with individuals and couples in Hampstead, North London.